I’ve long been a believer in the shallow-boil method of cooking greens. The typical way to cook a tender green like spinach is to cook it in only the water that clings to the leaves after rinsing. That way, the greens retain their structure, taste and nutrients. So, I simply apply that principle to leafy greens that need to cook longer — chard, kale, mustard, beet greens and others. They need more water than just what’s on the surface, so I add a little more to the pot. The conventional method of bringing a large pot of water to a boil and dunking the greens doesn’t seem to me to cook them much faster; it actually takes more time and energy, makes the leaves soggy and leaches out the good stuff.  That method works for green beans that you want to flash cook, but I don’t like it for greens.

I also have shallow-cooked fresh pasta in chicken or mushroom stock, which contributes flavor to the eventual dish.  It cooks quickly anyway, so why waterlog it? Rather, let it absorb the flavor of the liquid by cooking it in a small quantity of stock and adding more when it dries. So, I was really interested to read Mark Bittman’s comments in The New York Times Bitten blog this week about cooking dried pasta like risotto, in other words, adding small amounts of flavorful liquid to the pasta until it is tender and the liquid is absorbed. Basically a shallow-simmer method.  So I tried it and found, just like the way I cook greens, it takes about the same amount of time as the more conventional way, and produces a more flavorful result. 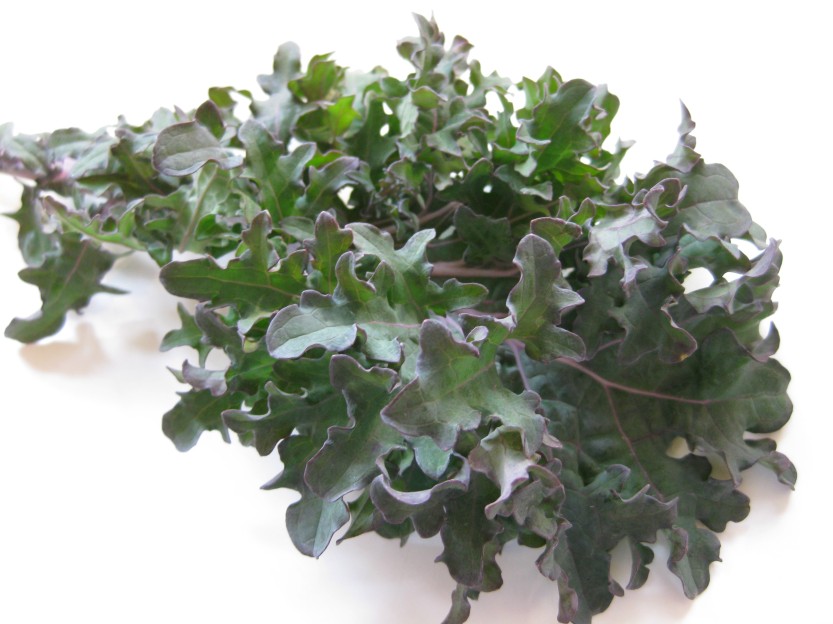 So, I made a pasta dish that, based on The Dad’s comments, is rather like the classic chard, raisin and toasted pine nut combination. I shallow-cooked kale in water, and twisty pasta in turkey broth from Tday (normally would use chicken), and combined them with red onion slowly cooked in olive oil and finished with balsamic vinegar. Then I added some grated Parmesan cheese to smooth things out and a sprinkling of parsley to pique the flavor and the color, plus ½ slice of thick-cut lean bacon as garnish. Yum.

A handful of kale leaves, torn into small pieces

Place the pasta in a pot (preferably a deep pot with a small circumference to minimize the liquid’s evaporation) and add about a cup of broth. Bring to a simmer and cook until the pasta has absorbed the liquid. Add more liquid, in ½-cup increments, until the pasta is cooked through, about 15 minutes or less.

Meanwhile, pile the torn kale in a wide, shallow pot (I use an All-Clad one shaped like a wok but with a single long handle), add water to about 1/3 of the depth of the greens and bring to a boil. Cook, tossing from time to time, until the leaves are tender, around 5 minutes but this will vary greatly depending on the age of the kale.

Also meanwhile, sauté the sliced red onion in a little olive oil until well cooked and browned, 15-20 minutes, about the time it takes to cook the pasta.  Then add a splash or two of Balsamic vinegar and cook to reduce.

Toss everything together, add cheese if using, and top with a sprinkling of chopped parsley.