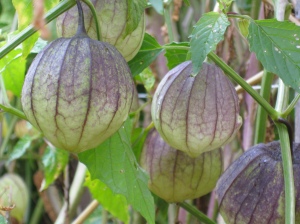 This past summer’s tomato harvest was a complete disaster in our area due to a fungal disease called late blight, so I was disappointed not to be able to can tomatoes, tomato sauce and tomato-based salsa for winter use for the first time in (believe it or not) decades.  I was really pleased that our farm (a CSA) persevered to plant lots of tomatillos and that the weather cooperated to ripen them before the frost. We get to harvest them ourselves and it’s great to be outdoors on a stunning, sunny fall morning with something still growing in the fields. So salsa verde from tomatillos it will be, some to can and keep for the winter and some to slurp up now – roasted, poached or raw. 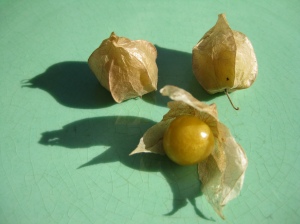 A related treat from the farm, planted in adjoining rows, is the husk cherry, or ground cherry, a diminutive relative of the tomatillo, measuring about 1/2-3/4 inch in diameter. I’ve been scooping up these little papery husks from the ground as share distribution and gleaning permit, and eat them raw by themselves or add them to salad.  They are like yellow cherry tomatoes with a fruity kick. Their sweet and piquant burst of flavor is a surprise, and I’ve decided that they can complement their tangy, unctuous cousin, the tomatillo, in a combo salsa of raw and cooked. 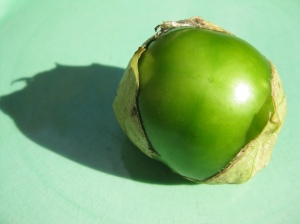 Tomatillos and husk cherries belong to a branch of the family that includes the tomato, but they are supposedly more akin to the gooseberry. Tomatillos are also referred to as “Mexican tomatoes” since they resemble green tomatoes and supposedly originated in Mexico. They do ripen to yellow, but then they’re soft and neither the texture nor the flavor is as robust as when green. Avoid those. While husk cherries are harvested after they fall to the ground (which I’m guessing is why they’re called ground cherries), tomatillos are harvested when the fruit grows large enough to fill the papery, and somewhat dry, bag or husk, and even starts to poke through.

They do keep for a few weeks in a cool spot (or refrigerator), so I stockpile my CSA one-quart-a-week harvest limit to accumulate enough to preserve, that is unless we just need to have some salsa now.  Here’s a simple salsa verde that uses both tomatillos and their cousins, but obviously the latter is just an extra treat.

Tomatillo Salsa with Husk Cherries (if you can find them)

Handful of cilantro leaves, torn into small pieces (about 1/3 cup or more to taste)

Husk cherries, husked and washed, about ½ c or more to taste (optional)

Poach the tomatillos, half of the onion and half of the pepper in water barely to cover, simmering for about 5 minutes or until tender. Drain well, cool and remove to a food processor. Add the rest of the onions and pepper and pulse to blend. Add cilantro and husk cherries and pulse again to chop roughly. Adjust the amount of pepper to taste. Makes about 1 ½ cup.

Variation: Chop a ripe avocado and add it to the tomatillo salsa.