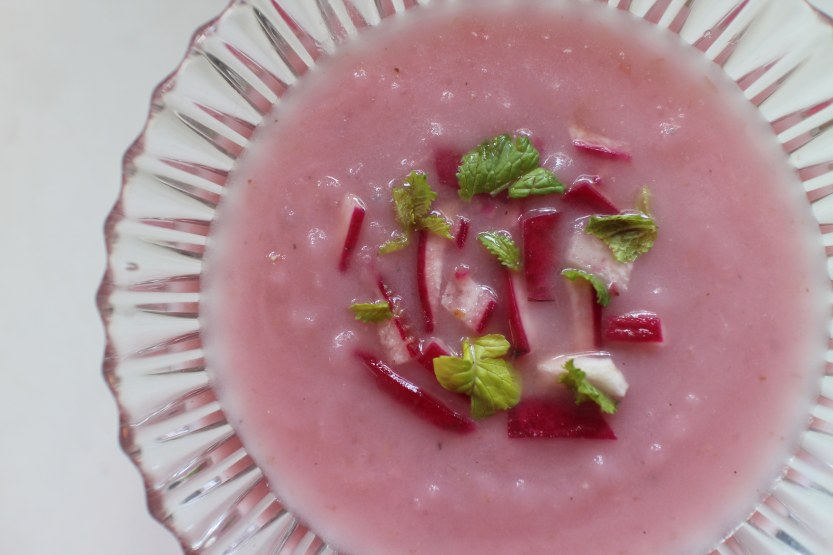 A bushel of muddy long red radishes arrived in my kitchen just before I was going away for a week.  Uh oh! For a person who loves excess for the opportunity to experiment, this was a frustrating moment. Aargh! I topped, tailed, scrubbed and bagged as many as reasonably fit in the fridge and took my chances on the rest. At least we removed the greens, which otherwise would sap the moisture from the roots and make them woody. Left the mud. Good enough! Returning home, the great radish experiment begins. Yay!

With early summer temperatures starting to climb, it’s time for cold soup, cooked in the cool of the day and served in chilled glass bowls at the peak of heat. Cooked with leeks (or onions), unpeeled radishes, and potatoes, this is very quick and simple and can be served hot, at room temperature or chilled.

One of the unintended consequences of leaving a pile of topped radishes alone is that they start to sprout, so I snipped the tiny leaves as garnish. All winter, I keep the ends of romaine lettuce, carrots, and radishes in little dishes with a small amount of water. They grow a second small leafy plant that I use in salads or as garnish.

Scrub the radishes but do not peel, Slice them into rounds. Clean the leeks well and slice them, using mostly the white and pale green parts, or if using an onion, peel and chop it into chunks. Peel and cube the potatoes.

In a large pan, melt butter and add the radishes and leeks or onions, and salt the mixture well. Cook over medium heat until wilted. Add the potatoes, cover the pan and cook for a few minutes. Add water to cover the vegetables and simmer, covered, until the vegetables are tender, about 20 minutes. Puree the soup with an immersion blender or in batches in a food processor. Add pepper and adjust the salt level. If serving the soup cold, you will need to make it slightly salty when hot. Cool the soup to the desired temperature (well chilled soup will take a couple of hours).

Sliver a few radishes and salt them for a few minutes to use as garnish, with tiny radish leaves if you have them, or parsley or dill.