A cooking challenge organized by Meg of Grow and Resist and Briggs of Oh Briggsy in which we explore a featured cookbook each month. 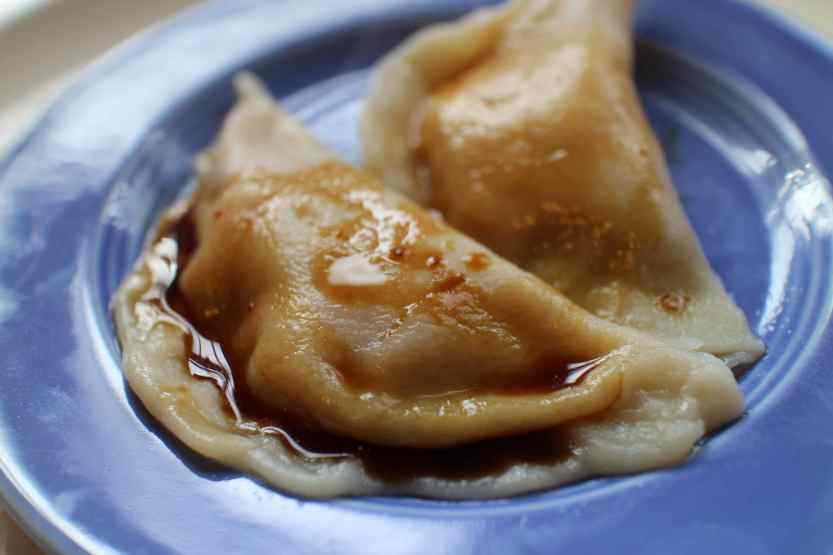 Who’d ever think that we would celebrate Chinese Lunar New Year with homemade dumplings? We did and they were delicious and surprisingly easy to make. Of course, I started cooking from Andrea Nguyen’s Asian Dumplings at the beginning of the book after I’d read the whole thing and made a trip to our local Asian grocery. I love that store. It occupies one end of a nondescript strip mall and goes by the catchy name “Asian Food” (haha). It’s easy to find on google but hard to find in a suburban neighborhood. The market is huge, chock full of packages I can’t read and ingredients I don’t recognize. Not to mention the fresh produce, meat, poultry and fish, and its own bakery and lunch counter. I discovered it during my kimchi phase last summer when I was seeking Korean chili paste. Luckily there are Korean food websites with labeled photos of packages, just as there are photographs in Nguyen’s book, which helped me find wheat starch, Thai rice flour, tapioca starch, Japanese dried shitake mushrooms, and so on. I emerged with an armload of staples for about five bucks. 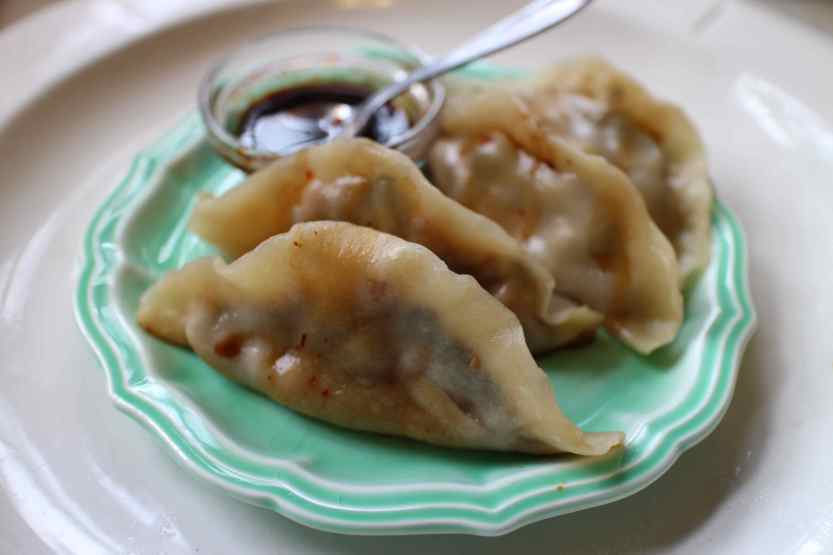 All that was the easy part. Getting the time to experiment turned out to be more problematic during a calamitous month in a household rocked by flu, again. My goal is to make something from each chapter, or at least something that uses each major type of wrapper: basic wheat flour dumplings, wheat flour and tapioca starch dumplings, spring rolls, yeasted buns, samosas, translucent wheat starch and tapioca flour dumplings, and rice sheets. And more. This will keep me busy for a while!

This cookbook meets many criteria that will keep it in frequent use in my kitchen. I like discussions of technique, especially when I know little about the subject. I luckily discovered Nguyen’s help desk at www.asiandumplingtips.com, which has great videos demonstrating techniques of rolling dough and shaping dumplings. Her explanations are clear and, I sense, reliable. The book contains enough variety in the recipes and their origins in different parts of Asia to make me want to return to the book again and again. Given the potential vastness of the subject, she strikes a good balance of recipes so the book seems manageable. 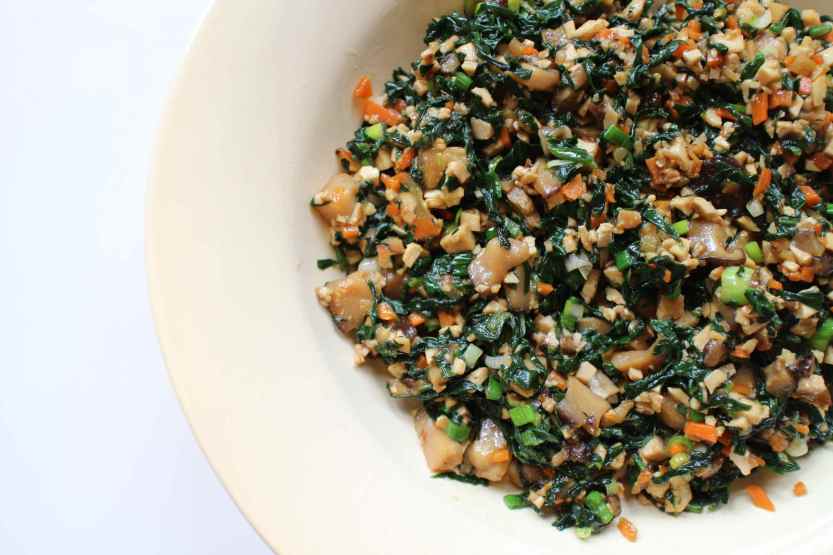 I chose to start with basic dumpling dough, and decided to prepare dumplings for boiling, steaming and frying.  The Pork and Napa Cabbage Water Dumplings (Page 31) were perfect for Chinese New Year, and I tried shaping them in three ways: half moons, pea pods and big hugs (gotta love those names). I served them with Tangy Soy Dipping Sauce (Page 215), which I thought could be improved, possibly with a different choice of soy sauce. Making my own chili oil next (but will have to consult with Mark Bittmann’s version which is awesome).

Next came Steamed Vegetable Dumplings (Page 35). These were my favorites because of the filling of chopped cooked spinach, ginger, shitake mushrooms, carrot and pressed tofu. Whether you ever make a homemade dumpling wrapper from this book or not, consult it for the delicious fillings. We couldn’t get enough of this one, and I will make it again with less finely chopped ingredients and serve it with cellophane noodles or rice. This recipe also introduced me to large Japanese dried shitake mushrooms, which will now become a staple in my pantry. Reconstitute a few on the weekend, jar them and you’ll be set all week to add them to all manner of dishes. 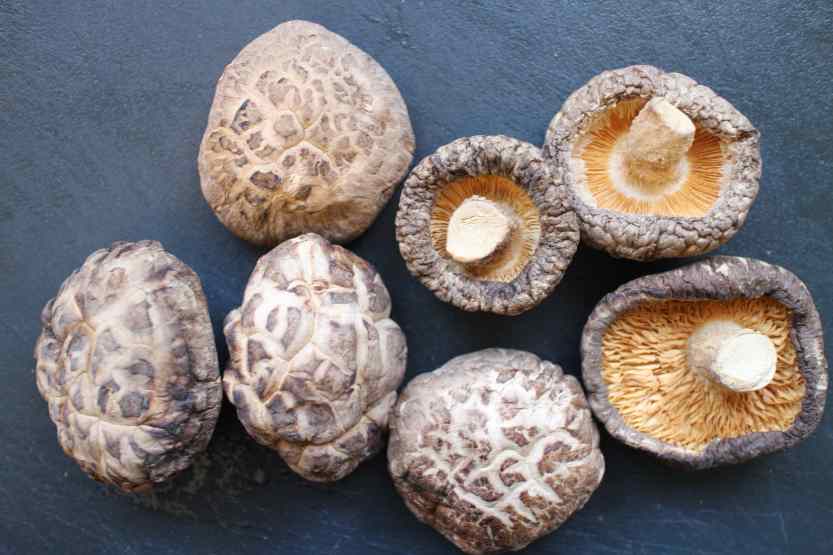 Since I was on a roll with this dumpling type, I went on to Gyoza, Japanese Pork and Shrimp Pot stickers (Page 41) with the intention of making some minis to add to Smoky Chicken Soup (Page 43) with the lovely gingery Chicken Stock from Page 222. I made the stock but not the finished soup yet. I froze some and am convinced that this will now be my go-to Asian chicken stock. 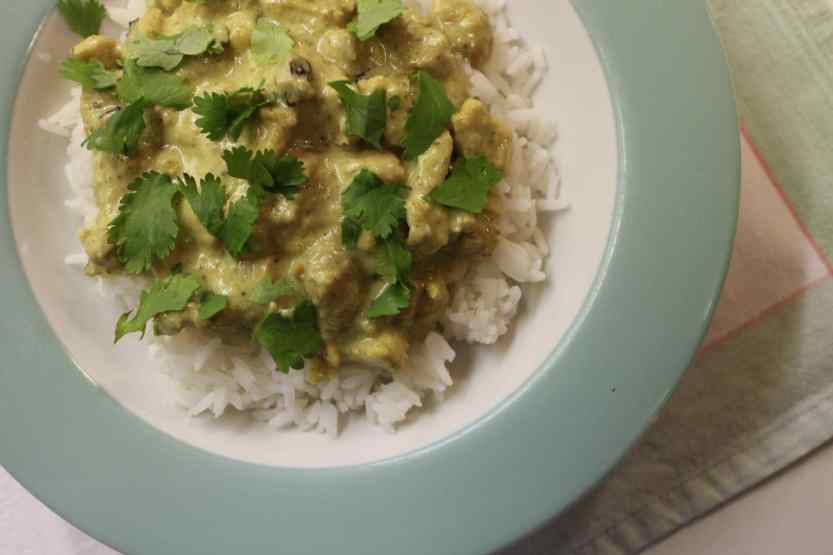 I then decided to go for dumpling wrappers with wheat starch and tapioca and filled buns, and I had the mise en place arranged just as the gluten-frees popped in for a meal. Scratch that and save it for another weekend.  I had already made the Curried Chicken Bun Filling from Page 102, so we ended up adding extra coconut milk and a few raisins and ate it for supper, proving again that the fillings are one of the main attractions of Asian Dumplings.

I’m so grateful to Meg and Briggs for including Asian Dumplings in the series since I now have another favorite book to cook my way through. And someday I’ll throw a dumpling party. I bet they did.