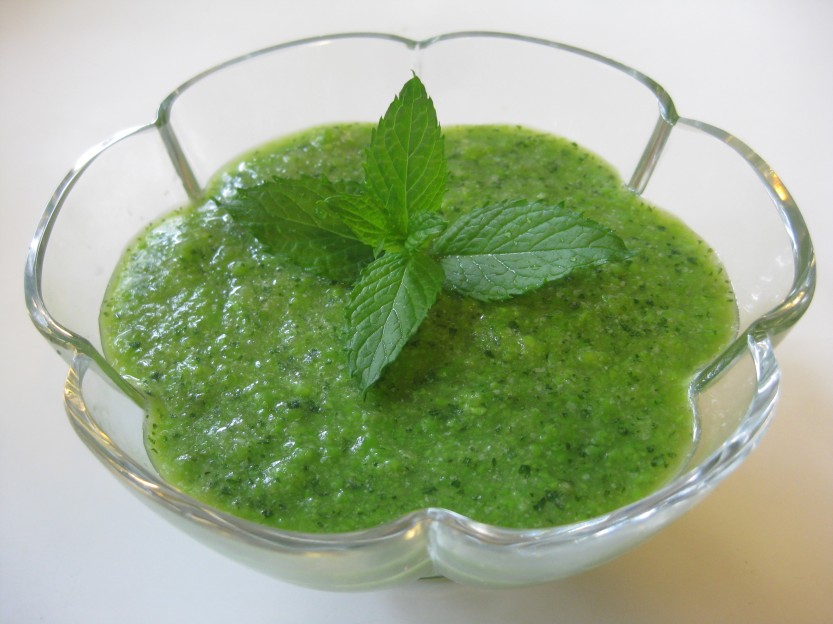 This soup captures the moment in late spring when shelling peas are at their peak and mint is young, when the weather is hinting of heat, the moment when cold food is once again welcome. Inspired by a so-called “green pea gazpacho” that I ate at the Mövenpick Hotel in Geneva last week, I went to a local farm to pick shelling peas, grabbed some leeks from the farmer’s market and spearmint from my garden. 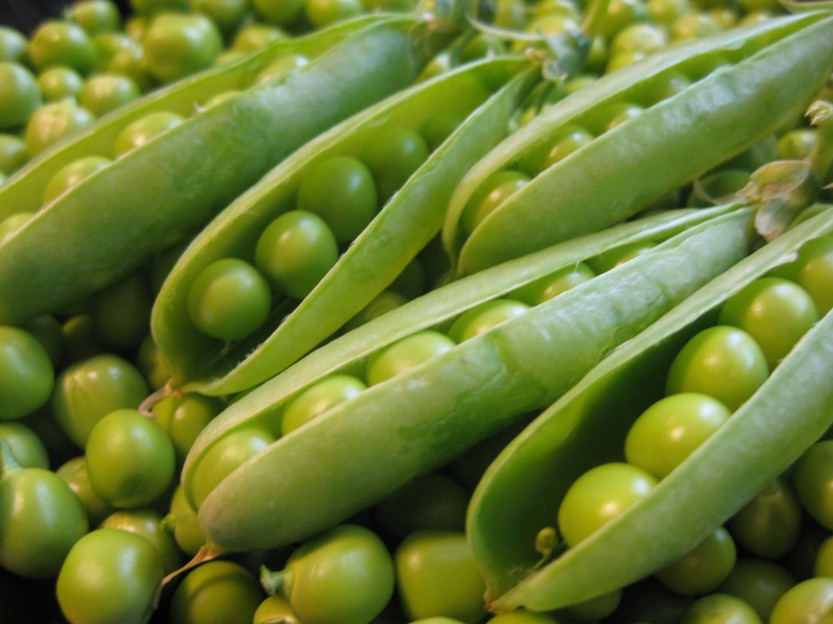 I wanted the flavors of the fresh vegetables and mint to shine through so the preparation took a minimalist approach. After shelling the peas and trimming the leeks, I used the shells and the discarded green parts of the leek to make a vegetable broth. The peas were very young, just starting to fill their pods, and I found that once cooked, the shells contained a layer of pulp that could be eaten much in the way you eat an artichoke leaf, pulling the flesh between your teeth. 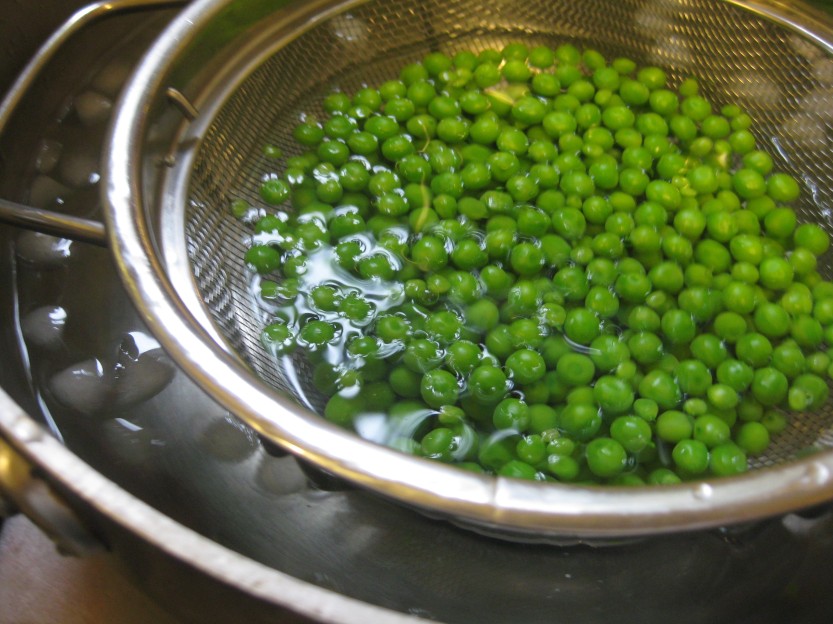 I simmered the leeks slowly in a little of the broth. I could have cooked them in butter or oil but was not convinced that the fat would translate well in the cold soup. I also cooked the peas in the stock, which enriched it even more.  After bringing the broth to a boil, I added the peas and cooked them briefly, only until they floated and the liquid started to return to a boil. I scooped them into a colander, which I plunged into a pot full of ice water to stop the cooking process. 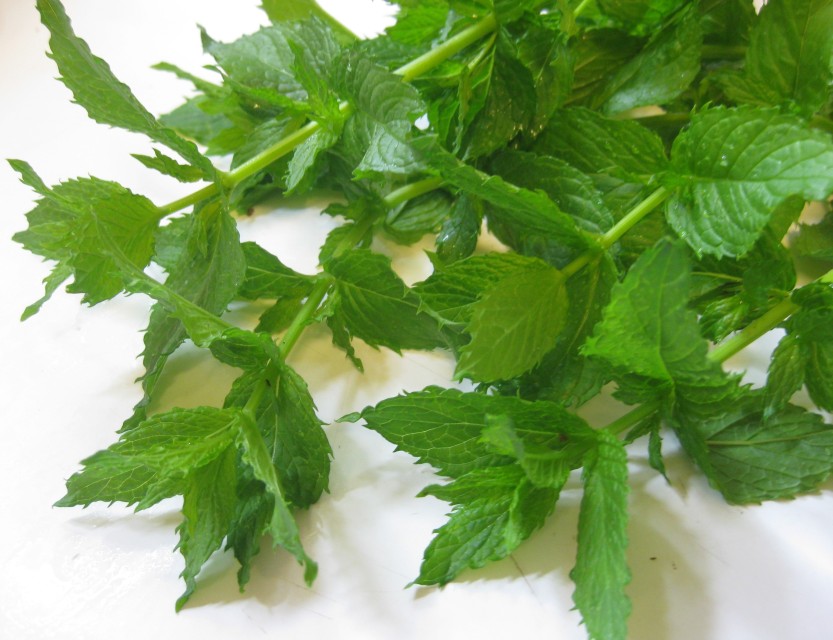 To make the soup, puree the cooled peas, broth, leeks, fresh mint leaves and a pinch of salt in a food processor until smooth. It’s important to have all ingredients cool or cold before pureeing in order to preserve the bright green color. Chill thoroughly. To serve, place a few cooked peas and some chopped scallions and/or chives in the bottom of a bowl and spoon the soup on top. 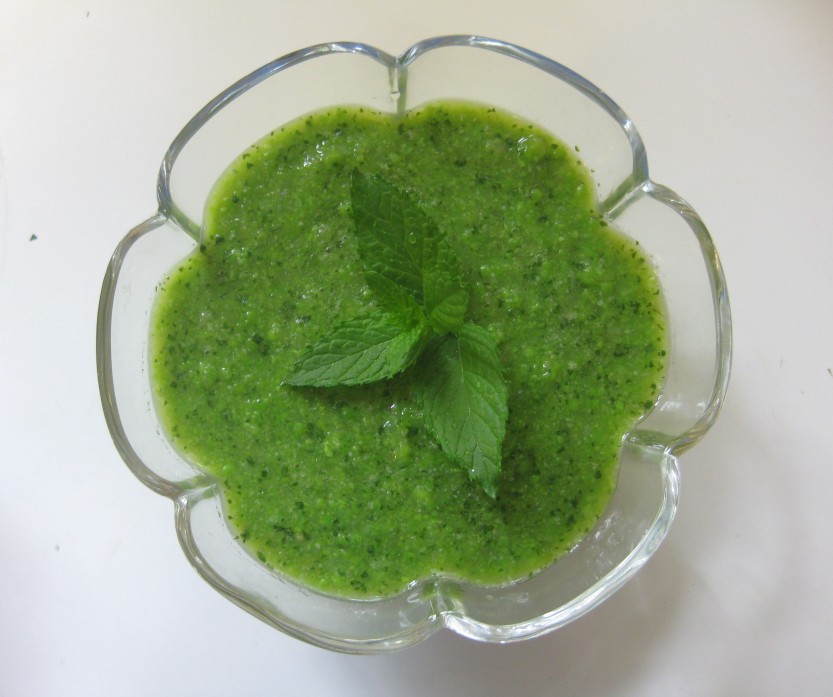 I liked the simplicity and pure, clean flavors of this slightly sweet soup. The version that I ate in Switzerland was smoother and creamier, and probably contained a potato and a little cream. It was probably also cooked longer and sieved. I will try this again, with a few variations, as this is definitely a late spring soup that I’d like to have in my repertoire. (By the way, frozen peas are pretty good, so you could make this with a 10-16 oz bag.)

As a lark (since as you know, I’ve rarely met a vegetable I didn’t want to roast), I roasted a few of the more tender pea shells as a little appetizer.  It worked!  The older ones were too woody, but the young pods were pliable enough to respond to the roasting technique.

Rinse the tea shells and leek trimmings and place them in a soup pot with water just to cover and add the salt. Bring to a boil and simmer for about 30 minutes. Drain and discard the vegetables (or reserve the most tender pea pods for roasting).

Simmer the leeks in a very small amount of broth until tender. Set aside to cool.

Prepare a pot full of ice water. Bring the broth to a boil and add the peas. As soon as they float and the liquid starts to boil, remove the peas to a colander and plunge it into the ice water to stop the peas from cooking.

Cool all of the ingredients. Reserve a few peas for garnish. Puree the remainder of the peas, with the broth, leek and mint, in a food processor until very smooth. Add a pinch of salt if needed. Chill until ready to serve. To serve, place the reserved peas, a little chopped scallion and/or chives at the bottom of a bowl, spoon on the soup and garnish with mint leaves. Makes about 4 cups, serving 3-4.

To roast the tender pea pods, preheat the oven to 425 degrees, sprinkle the pods with a little olive oil and salt and roast until crisp, about 7 minutes. 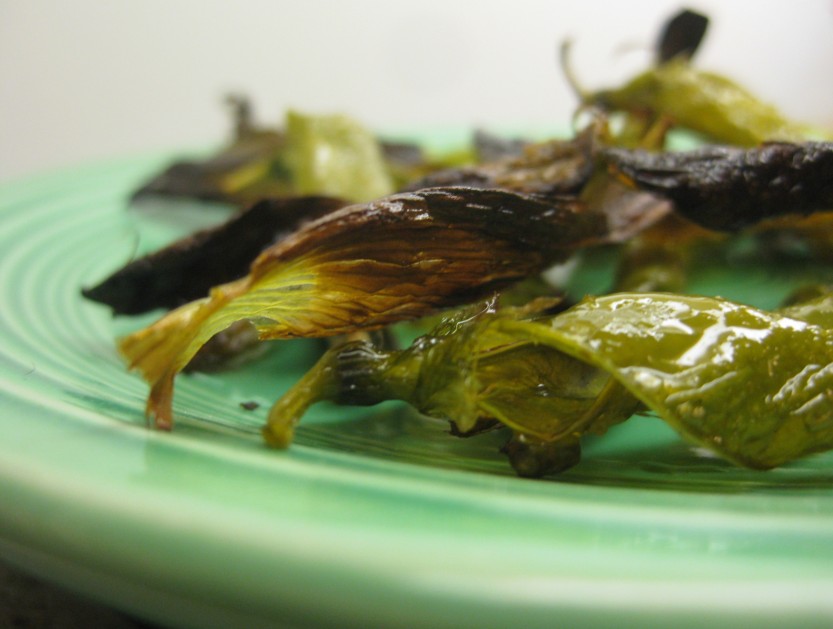