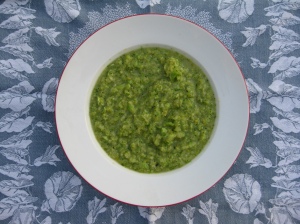 When the garden at the CSA is overflowing with vegetables in the early fall, there is more produce than we can reasonably handle. There are certain offerings that can be pickled, canned or otherwise preserved long term, and I certainly put up whatever I can to last us through the winter. However, there are other items that do not individually lend themselves to this treatment: eggplant, zucchini, broccoli, cauliflower, sweet potatoes, to name just a fraction. These I tend to make into soups, sauces, starters for stews, etc. and store them in the freezer as the base for dinner later on.

This week, I really needed to clean out my refrigerator of a few large items (including several heads of broccoli) and I also wanted to use all kinds of unused odds and ends such as a few mushroom stems, a leek, a few small tomatoes, a handful of parsley, along with my staples of onions, carrots, celery and even a couple of potatoes that were getting tired. So I first made a vegetable stock, which yielded enough for the broccoli soup plus some to freeze for another day (or use in a squash risotto, which is actually what I did).  I cooked the broccoli stems with onion, celery and the stock, and separately blanched the florets in boiling water to retain their bright green color. The mix was pureed in the food processor and frozen for later use. When ready to eat, I typically add a dollup of yogurt, or sour cream, or a little heavy cream to finish. I have also made this with chicken stock, which doesn’t seem to need to cream.

3 cups (more or less) of vegetable stock, see below (can substitute chicken stock)

Saute the onion and celery slowly in the butter or oil until soft.

Add the broccoli stems and sauté on medium high heat for a couple of minutes.

Add stock and simmer for about 20-25 minutes or until soft. Set aside to cool.

Meanwhile bring a pot of water to the boil and blanch the florets until tender, probably less than 5 minutes. Drain and cool.

Puree the broccoli stem mixture in a food processor until smooth, then add the florets and process until it is smooth but remains a little chunky.

Season with salt and pepper and a grind of nutmeg.

Serve with a dollop of sour cream or yogurt, or mix in a little heavy cream.

All quantities are optional, as is the mix of ingredients. One thing or another will change the taste of the stock somewhat, so if you’re doing something delicate, pay attention not to add something to the stock that will compete. This is what I did today:

1 leek (or use just the trimmings)

2 stalks of celery, chopped, plus some left over from the tops of other stalks

A couple of peppercorns

Bring everything to a boil, reduce to a simmer and cook for about an hour. Drain, pressing out the liquid from the vegetables.